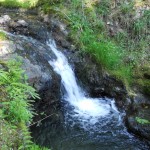 Lalla’s poetry is always an inspiration for me.   She was born in Kashmir in northern India in 1320 and died in 1392.  She was both, a mystic of the Kashmiri Shaivite sect and a Sufi saint. Her poetry are some of the earliest compositions in the Kashmiri language.  She is the Kashmiri equivalent of Germany’s Hildegard of Bingen.

Lalla married at age twelve and moved into her husband’s family home. She was mistreated by her mother-in-law and  her husband. In her early 20s, she left left her marriage and became a disciple of a respected saint in the Kashmir Shaivism tradition of tantra. She dedicated her life to Lord Shiva. Lalla was called to wander from village to village,  nearly naked, and singing songs of rapture. Her short, simple, and direct songs spoke to common people. Her words  open a window to the soul and allow Truth to be seen.

Read her poetry at the link below.