Yesterday, I posted a blog titled, “Should Women Rule the World?” This was not my title, it was the title of an email I recieved, that I thought was provocative and would be interesting to post here. I want to clarify my thoughts on the subject.

I don’t even believe in the concept of anybody ruling the world. I want to see a world where instead of a desire to rule over the world there was a desire to tend the world for the benefit of all beings. My view is not that we should value feminine over masculine but that we see that they both have valuable gifts to offer and that both be appreciate equally. The world would be far better off if all humans had acess to the full spectrum of both masculine and feminine wisdom. I believe that many on the Tantra path are integrating these aspects in ourselves so we can be more whole wise beings.

Until that happens wouldn’t it be great if the feminine perspective was included more in the political and world scene. One of the clips on the link I posted, showed a panel of men (no women) trying to figure out a response to the ecomomic crisis. The point of the clip being that men are more short-sighted and willing to take greater risks, while women take a more cautious view and consider the future more. When one point of view is excluded there are bound to be blind spots they create problems.

I believe including women in policy-making all over the world is a start, but often women working in male dominated fields loose their feminine prespective, in an effort to be accepted they become one of the boys. So it is not just about women doing it or doing it better. There are men in the world who carry the feminine prespective as well. It is about learning to trust that by honoring both feminine and masculine we can create a healthier and happier world. This honoring begins within each one of us, as we become more aware of our inner male and female sides. I believe that exploring the inner masculine and inner feminine is an important part of shifting the paradigm from one of domination to one of partnership. 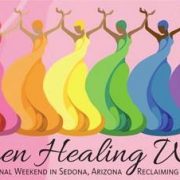 Hands-On Sexual Healing Comes Out of the Closet

Awaken the Goddess Within, Asheville, NC

Yoni Talk and the Goddess Within