Following the announcement made by Dr Foldes, OBGYN in France, stating that women and children of all ages who have suffered the atrocities of clitoral excision, or female genital mutilation the equivalent of male castration in its barbarity, now have the possibility to regain sexual pleasure and be whole once again, thanks to medical advances and scientific progress. Rael, the spiritual leader of the Raelian Movement decided to help as many women as possible to regain their sense of pleasure and founded Clitoraid, a private non-profit organization with the aim to sponsor those women who want to have their clitoris rebuilt.

Considering the huge number of Burkinabe women who are candidates to be operated on and as Clitoraid received offer from a few doctors to travel to Bobo Dioulasso and help rebuild the clitoris of all the circumcised women, the Prophet Rael declared: “Instead of using Clitoraid’s collected money to operate on just a few women, we should create the first Raelian Hospital, the “Pleasure Hospital”, and operate on all African women, for free, with the help of Raelian or non-Raelian benevolent doctor”.

The planned facility should be built in Bobo Dioulasso, Burkina Faso. It will be composed mainly of one operation room and two additional rooms. We will need about $70,000 to build and equip it. We will keep you posted on the construction plans in the Hospital section.

It is a crime against humanity that today, in this so called enlightened 21st century, women in under-developed countries are subjected by force to participate in the sex trades, are denied common freedoms as we know and enjoy in the west, and in certain cultures, are slaves to barbaric practices such as clitoral mutilation in the name of religion and, moreover, male dominance. We can all help. we can support our sisters, and Adopt a Clitoris!

Also, if you want to organize fundraisers in your community, contact us and we will provide you with hints and as much help as we can.

Yoni Talk and the Goddess Within 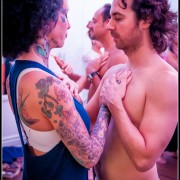 The 3 Secrets to Being a Juicy Woman